Rethinking the Mosque, Opening the City 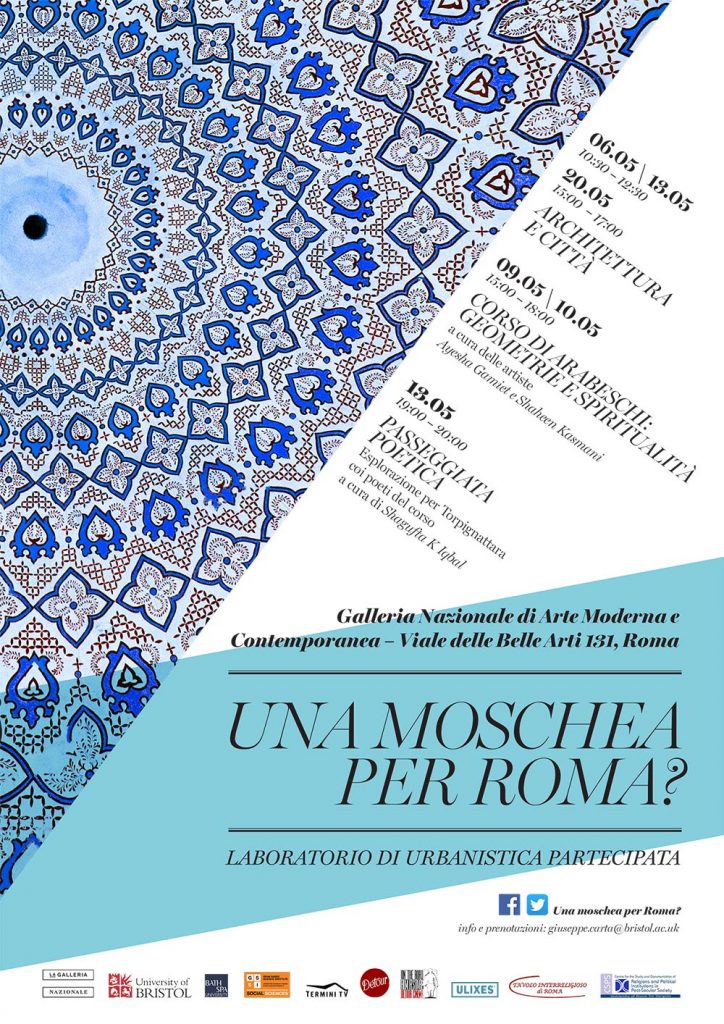 Una moschea per Roma? consists of three series of public meetings to be undertaken in Rome during May 2017, ending one week before the start of Ramadan 2017. The meetings are open to everyone—Muslims and non-Muslims, institutional actors, various civic organisations as well as private citizens.

Using creative approaches as stimuli, the project forms a platform for conflict management, applying social sciences with participatory arts to improve cross-cultural dialogue, co-design pathways for religious pluralism and impact policy-making around the potential building of Islamic spaces in Rome.

The documentation produced for and during Una moschea per Roma? will be exposed, from 19 May on, at Cinema Detour, Via Urbana 107, 00184 Rome, as part of the On the Road Festival programme.

The opening evening, 19 May 21:00, will see the screening of the documentary ‘Io sto con la sposa’, directed by Gabriele Del Grande, Antonio Augugliaro and Khaled Soliman Al Nassiry will be shown.

Free Entrance to the exhibition. Membership only admission to the screening.
Donations welcome in support of Gabriele Del Grande’s latest project “Un Partigiano mi disse”.
In collaboration with Zalab.

Architecture and city planning—6 and 13 May 10:30-12:30; 20 May 15:00-17:00 Participants engage with audio-video materials about Islamic traditional architecture and on mosques built across Europe in the last 20 years. Such exhibition grounds a number of participatory activities for the participants to actively re-think urban planning practices for building mosques. The final outcome will consist in a number of guidelines to be addressed to City Council and media. Meetings are open to everyone. They are set at Galleria Nazionale di Arte Moderna e Contemporanea, Viale delle Belle Arti 131, 00197 Rome. The workshop is led by Giuseppe Carta (University of Bristol), coordinated by Francesco Chiodelli (Gran Sasso Science Institute) and supported by trained facilitators. The workshop exhibits selected artworks from Ulixes Pictures and TerminiTV. The exhibition is curated and finalised by artists Shaheen Kasmani and Panayiota Demetriou.

Islamic geometric patterns and cosmologies—9 and 10 May 15:00-18:00 Participants learn about the cultural, historical and stylistic contexts within which Islamic art developed. Classes consist of practical sessions whereby participants can discover how to construct traditional Islamic geometric patterns, create their own Islamic-inspired floral designs, and learn painting and gilding techniques from the Islamic world. Meetings are open to everyone. The course has a maximum of 20 participants. It is requested a participation fee of €50 and €30 concessions. The meetings take place at Galleria Nazionale di Arte Moderna e Contemporanea, Viale delle Belle Arti 131, 00197 Rome. The workshop is held by artists Ayesha Gamiet and Shaheen Kasmani.

Poetic improvisation, displacement and spirituality—13 May 19:00-20:00 This workshop aims to bring its participants, only Muslims, to creatively represent their affective relationship with both the city of Rome and Islamic faith. By exploring harmony and rhythm in languages as echoes of cosmologies and faith revelation, participants address through poetic improvisation the complex unfolding of displaced identities and overarching metaphysics, of transcendence and immanence. The activities are set on a number of locations. A final public performance will be conceived as a walking exploration throughout the urban neighbourhood of Torpignattara. The workshop is held by spoken word artist and practitioner Shagufta K Iqbal.