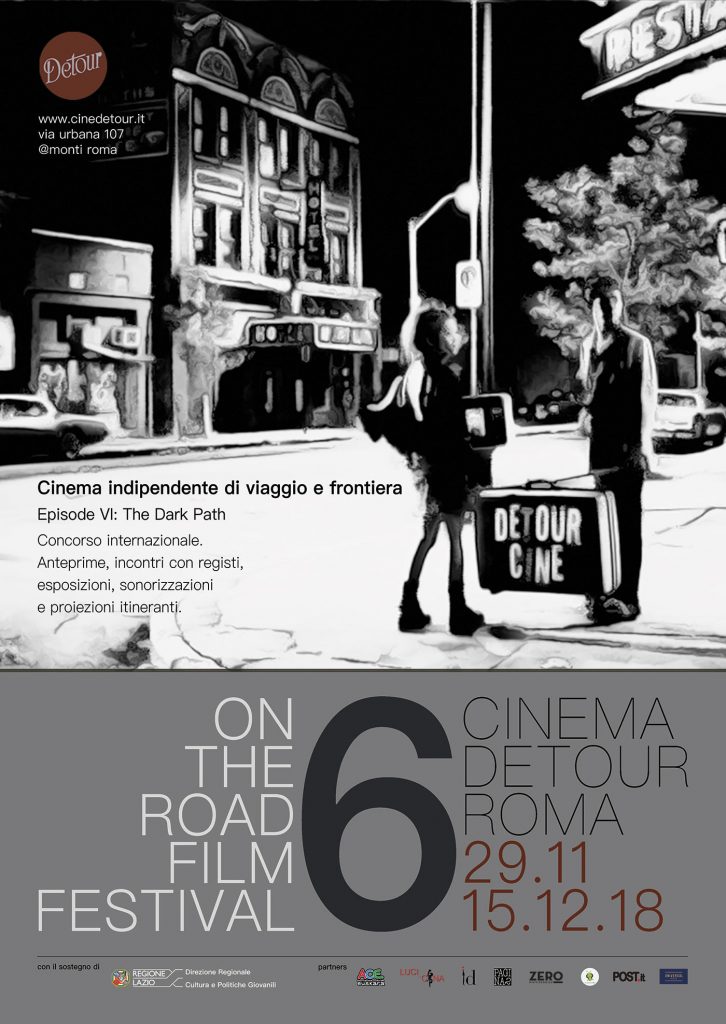 29th November sees the start of the sixth edition of the On the Road Film Festival, the international festival of independent cinema featuring films of road trips, quests and new frontiers with itineraries crossing borders bringing
disorientation and psychological dislocation. The main venue of the festival is once again the legendary Cine Detour in the heart of the Monti district in Rome.
This year the festival is proudly presented by the Detour association with the support of the Lazio Region (Regione Lazio – Direzione Regionale Cultura e Politiche Giovanili).
Once again this year we have two juries of great standing. Presiding in the full feature length section is Marina Lalovic, radio host, journalist and presenter of Rai Radio3Mondo. Helping with the selection, we have Gea Casolaro,
visual artist who since 1994 has been exhibiting in museums and galleries around the world and Davide Stanzione, film critic and cofounder of the online cinema dictionary LongTake. In the shorts section, the President is Simone
Manetti, director and screenwriter of the award-winning film Ciao Amore Vado a Combattere. With him on the jury we have Lucilla Castellano, travel blogger and editor, and Vincenzo Scolamiero, artist and painting teacher in the Academy of Fine Arts (Accademia di Belle Arti) in Rome.
From 29th November till 2nd December, the International Competition will form two separate sections: The Road with six full length feature films and ShortCuts with nine shorts. The films have been selected from over 400 works from all over the world.

From 7th till 15th December the unique and unrepeatable Special Events.
On Sunday 9th December, in particular, we would like to highlight the live soundtrack accompanying the Japanese horror masterpiece of Kaneto Shindo, Onibaba – The Assassin, under the direction of Mike Cooper, musician and
“collagiste” of sound, who will improvise based on his new album Tropical Gothic.

On 7th and 15th December we turn our focus on contemporary Basque cinema in collaboration with Euskara, Dicembre Basco and Txintxua Films with two Italian previews: Oreina (The Deer) by Koldo Almandoz, rising star of
Basque cinematography, where the flourishing natural countryside around San Sebastián winds through what remains of the alienating industrial world, already a thing of the past; Dantza from the acclaimed Basque dancer, director and screenwriter, Telmo Esnal, and with the choreography of Juan Antonio Urbeltz is a deeply collective experience, a work rich in history, culture and significance and an aesthetic way outside the common standards.
“The Dark Path”, the theme proposed for this sixth edition of the festival, comes from looking back at the perceptions prevalent in most of the works presented/selected: a murky investigation into the persistent sense of crisis of a natural world which is no longer just a backdrop but the guts of a story which begins to take on the dark and loaded shades of the noir, where the boundaries between opposites (condemnation/salvation, imprisonment/escape, isolation/closeness, duty/freedom etc.) become ever more blurred.
But we are not without some sparks of hope, joyous madness and luminous poetry. We have creative resistance to a hostile world and resilience is a formidable weapon for those who have nothing left to lose.
In the full length features section we have three Italian previews: Our Wildest Dreams from the young Berlin director Marie Elisa Scheidt, which depicts the protagonists Foots and Torjus torn between the expectations of society and their love of freedom, in the search for themselves in the asphalt jungle of America and in the Norwegian forests; Cross from the French director Idir Serghine which tells the story of an ex-motocross driver in crisis after an accident who risks destroying all that remains good in his life; UltravoKal from the French-Lebanese director Christophe Karabache, tells of the visionary and surreal flight of Erwan and Celia from an agent sent by the System to track down and capture them, alive or dead.
Three films from promising young Italians are competing: with Nimble Fingers from Parsifal Reparato we go to Vietnam to get to know the courage and determination of Bay, a young worker in a factory on the edge of Hanoi in one of the world’s largest industrial production areas; Blue Kids from Andrea Tagliaferri – produced by Matteo Garrone, interpreted by Fabrizio Falco, Matilde Gioli and the new promising actor Agnese Claisse – we are thrown into the lives of a brother and sister, inseparable but alone, and into the cynical reality which surrounds them, as violent and alienating as their gestures. Happy New Year from Désirée Marianini, finally, takes us to an urban periphery in China, to a little crumbling building and its only inhabitant: a young 40-year-old who watches the world
with cynicism, surrounded by the incessant noise of building works.

In the competition section Shortcuts>Cortometraggi many of the pieces are from Asia and the Middle East: Dreaming in March from Li Zhang, Dancing in Manila from Francesco Conte, OPIUM from Emiliano Pinnizzotto, Blue Tomorrow an animation from Numan Ayaz, and DRIVE from Sara Gama, in which Zeinah decides to wear the hijab as family tradition requires, telling us what it means to be a Muslim in the America of today.
And there are plenty of shades of noir: Shelter from Daniel Andrew Wunderer and Veuillez ne pas tenter d’ouvrir les portes, a supernatural thriller from Baptiste Martin-Bonnaire. And poetry and a joyous point of luminous artistic madness we find in La Chatouilleuse D’oreilles from Amelia Nanni and in Des Confettis sur le Béton from OrianeBonduel and Marie-Sophie Chambon.

Saturday 8th December, ZAD! Zona Arte Detour hosts Poeta de Malagrotta with oil paintings by Daniele Roncaccia, under the direction of Cristina Nisticò. The “Poet of Malagrotta”, as he describes himself, finds spaces of unusual
beauty and humanity on the streets and in the outskirts of the city. The painting of Roncaccia is characterised by a disenchanted candour and a lack of frivolity.
Also on Saturday 8th December in the Detour cinema we will be projecting the two films which have won each of the two sections of the 2018 competition.

And finally, on Friday 14th December, On the Road Film Festival 2018 > Orientalia, a selection of Films from the East at the Libreria Pagina 2, Via Cairoli, 63 Roma. Free entrance.

The programme can be subject to change
Info at  www.cinedetour.it and FB cinedetour
Entrance is restricted to members with annual subscription.